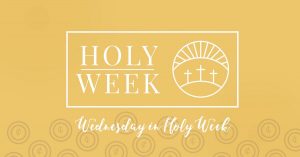 As part of a beloved Ascension tradition, we will have lay homilists on Monday, Tuesday and Wednesday of Holy Week. Kate Rutherford was the homilist on Wednesday.

When I begin to think about a reflection like this, I look for the way in – a door – to understand how the readings work together and how the ancient texts speak to our condition today. We all know the Easter story. We have heard it over and over, year after year, with diﬀerent excerpts for years A, B and C. The ending of the story never changes. But our understanding is always informed by who we are this year, and what is happening around us. In 1995, Bishop Robert Denig of the Diocese of Western Massachusetts explained this phenomenon so eloquently when he drew a spiral in the air, and stated that the facts at the base of the spiral don’t change, but where we are on the spiral, and thus our perspective, changes as we move through our lives. And so it is with the story of Jesus as he moves inexorably to his Crucifixion.

When I was very young and listening to Reverend Alexander T. Coyle of the First Presbyterian Church of Troy, Ohio, I was overcome with horror at the description of the nails, the sour wine and the lonely tomb. I couldn’t understand how someone could do that to another person.

Why did Jesus have to suﬀer, especially that way?

I questioned my faith as a young adult and did the usual exploration. Joseph Campbell’s series with Bill Moyers in the ‘80s helped me back to the tradition in which I was raised and ultimately landed at St. John’s Episcopal Church in Ashfield, Massachusetts. The story of Holy Week hadn’t changed, but I had and I am grateful for the now familiar patters of worship as we go through the liturgical year.

As I read over the appointed passages for this Wednesday of Holy Week (I asked Mother Liz if there was a name for these first three days of Holy Week – the triduum before the triduum? – and she said they’re called Monday, Tuesday and Wednesday) I was struck by the number of times shame is referenced in the Old and New Testament Passages:

In Psalm 70: “Let those be put to shame and confusion who seek my life….Let those who say ‘Aha, Aha!” turn back because of their shame.”

In Hebrews: “…looking to Jesus, the pioneer and perfecter of our faith, who, for the sake of the joy that was set before him, endured the cross, disregarding its shame, and has taken his seat at the right hand of the throne of God.”

Crucifixion was a shameful death in Roman times and an excruciating death at any time. Jesus knew his fate. The Psalms for these three days are all about seeking God’s help and protection, even though persecuted. Jesus told the disciples in each of the Gospel readings that he would not be with them very long. The crowds were hoping that Jesus would liberate them from the Roman oppressors and waved palms as he entered the city. None of them could imagine the fate that awaited their teacher, even though Isaiah had given them plenty of warning.

I have always been intrigued with the dichotomies in the Bible: the weak will be made strong; the lowly will be raised up; the meek will inherit the earth – the Beatitudes mirror the Psalms and distill the essence of God’s love. Jesus tells us: “blessed are the persecuted righteousness’ sake for theirs is the Kingdom of Heaven.”’

The horrible truth is that there is no Resurrection without the Crucifixion. Jesus fulfilled all prophecies that brought him to the agony of the Cross. Crucifixion was shameful, but He was not shamed. What is the counter to the shame of the Cross? Jesus tells us as he hands Judas the piece of bread and sends Judas of to do what he must do: “Now the Son of Man has been glorified and God has been glorified in him.” All of the pain, all of the shame – every bit of it, was required to bring Jesus to his Father’s side. He knew that God was with him as in the Psalm: “The Lord GOD helps me…I know I shall not be put to shame.”

The time we are living in – this particular point on the spiral will continue to inform our understanding of Jesus’ death and Resurrection. Jesus must die to rise to glory. Death is our reality now. So many people dying. How can we comprehend the refrigerated trucks at the doors of the hospitals? The horror of it, the shame of those who aren’t helping. The grace and glory of all those who minister to the sick and dying in so many ways, bid us to look at how we understand Holy Week this year. This is the door I was looking for. I don’t know what we will learn from this. I can’t know exactly what happens to the souls of the departed, but I have faith that they are welcomed into the Kingdom of God. I don’t know how the story ends, really. This time is given to the world for a purpose that will continue to unfold.
Amen. 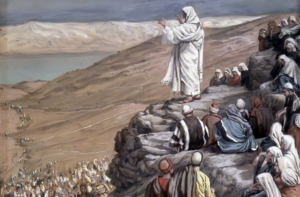 This Sunday, following the 11 am service, Ascension will hold its annual meeting. All are welcome to attend, whether or not you’re a pledging member of the parish. For this special Sunday, we will have three very significant pieces. Starting at 10:45 am, the Prelude will be perhaps the greatest masterpiece of César Franck, his Choral in E Major. The Offertory Anthem will be the highly dramatic and inspiring “In the Year that King Uzziah Died” by David McK. Williams. And the Postlude will be Bach’s formidable “We all Believe in One God.” 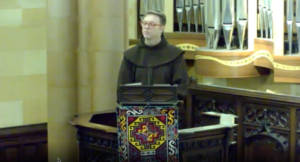 Sermon:
The Third Sunday after Epiphany 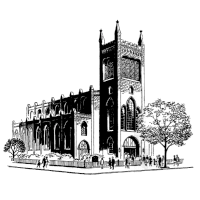